The state of Hawaii has never observed daylight-saving time. Arizona tried it and rejected it. Utah and Nebraska have considered dropping it. And this year, Vladimir Putinabolished the practice in Russia.

Meanwhile, one Alabama state senator likes the time change so much, he wants to stick with it year round.

The historic reason for observing daylight-saving time—which ends at 2 a.m. on Sunday when clocks revert to standard time—is to conserve energy, by pushing sunlight forward into the evening, reducing the need for electric lights.

The U.S. government has found the strategy works. But two academic studies published in peer-reviewed journals rebut the idea, and one even concludes the policy increases demand for electricity.

The most recent government study, by the Department of Energy, tested whether expanding daylight-saving time by four weeks in 2007 reduced the use of electricity, as intended.

The study examined the additional weeks of daylight-saving time using data provided by 67 utilities accounting for two-thirds of U.S. electricity consumption. It compared average daily use in 2006, when there was no daylight saving, with the same period in 2007 when the extension took effect and found a reduction in electricity use of 0.5% in the spring and 0.38% in the fall.

Hendrik Wolf, an economics professor at the University of Washington whom the Department of Energy consulted, said the analysis was limited and lacked a scientific control area, making it impossible to determine whether the changes were caused by daylight-saving time or other conditions.

“We don’t know how the U.S. would have behaved without the daylight saving time extension,” Mr. Wolff said. 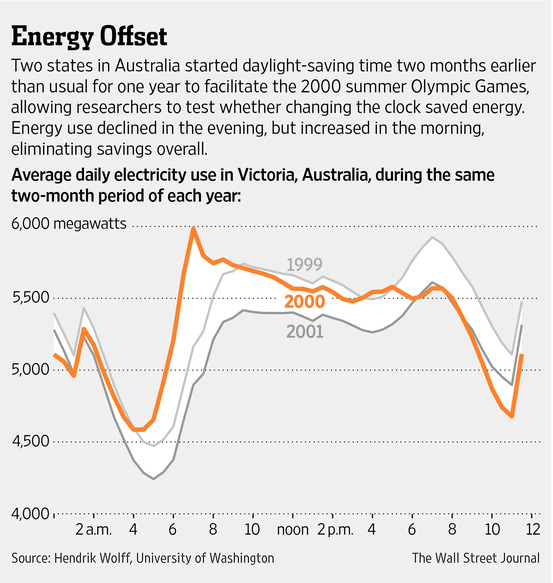 The academic studies, including one by Mr. Wolff, took advantage of serendipitous circumstances.

In Mr. Wolff’s study, two states in Australia started daylight-saving time two months earlier than usual for one year to accommodate the 2000 Summer Olympics in Sydney.

To control for the influence the Olympics might have had, the researchers excluded the two-week period of the games from their study. Using half-hourly data of electrical use, they examined the state of Victoria, which, like New South Wales, extended daylight-saving time, but didn’t host the games. As a control, they used neighboring South Australia, which didn’t extend daylight-saving time, and they compared electricity consumption in each of the two states over a seven-year period, from 1999 through 2005.

The study, which was published in Journal of Environmental Economics and Management, found that electricity use decreased in the evening but increased in the morning, resulting in no overall reductions in consumption.

“We can reject the hypothesis that there are electricity savings,” Mr. Wolff said. The report notes the findings could carry over to the U.S., particularly in California, whose climate resembles Victoria’s.

Similar circumstances arose when Indiana adopted daylight-saving time statewide for the first time in 2006. Previously, only 15 of the state’s 92 counties had observed the practice.

The unusual circumstance allowed Matthew Kotchen, an economics professor at Yale, to examine electricity use before and after the policy changed, and compare a treatment group—counties changing time for the first time—with a control group—those that had observed daylight-saving time previously.

“The change in Indiana wasn’t just a change in the start of daylight-saving time,” Mr. Kotchen said. “It was a place that never had it before.”

The study, which was published in the Review of Economics and Statistics, examined residential data only, but the researchers didn’t believe commercial use would alter their findings.

“Big-box stores don’t turn on or off lights based on whether it’s light outside or dark,” Mr. Kotchen said. “In a commercial building, the lights are on when people are working no matter what.”

Rather than conserving electricity, the study found that daylight-saving time increased demand for electricity. Conditions may vary in other parts of the country, but the study concluded that Indiana is representative of much of the country.

That doesn’t mean daylight-saving time has never worked since its introduction during World War I. But, said Mr. Kotchen, “the world has changed. Lighting is a small amount of energy and electricity use in households. The big things are heating and cooling, particularly as air conditioning has become more prevalent. We’re fooling ourselves to continue calling it an energy policy given the studies that show it doesn’t save energy.”